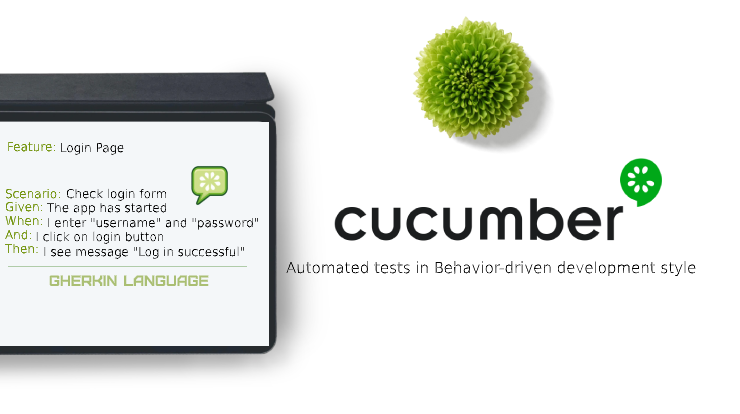 Cucumber is a test framework that is used for writing BDD tests for web applications in a simple English language text called Gherkin. Tests written in Cucumber can be easily read by everyone within the team whether technical or non-technical individuals. It provides some form of live test documentation that is updated regularly but in the background, there are methods that are mapped and executed with each Gherkin sentence.

When BDD comes into the picture, Cucumber is in the central point of it because it supports the behavioral driven development approach for more structured and easily readable automation tests.

It’s easy to use, and apply to the project and it can be integrated with various other tools and frameworks, no matter if you’re performing API or UI tests.

There are a couple of test structure “layers” that needs to be created in order for the tests to work correctly. First, you need to write a plain Gherkin test scenario in a feature file containing GIVEN, WHEN, THEN format. This is the BDD approach implemented for the purpose of writing automated tests. It explains what is the name of the scenario, what the test needs to have as preconditions, what are the actions of the test, and the output of those actions. One test can have multiple preconditions, actions, and results and that can be achieved with the keyword AND. Second, you need to create the step definition file.

There are many advantages Cucumber offers:

Once incorporating Cucumber into your testing framework you’ll get the chance to work with the powerful features that Cucumber offers. I will mention some of the most important ones.

The Feature keyword is defined as a functionality or a service within the project. The preferred approach is dividing multiple smaller features from one big functionality and work on them till they’re fully covered.

One example of a feature is:

That feature can be saved in a feature file called: userSignUp.feature.

One feature can have the following keywords:

One example of a feature with it’s keywords:

Description: User navigates to the SignUp page, fills out the form with valid input data, clicks on sign up button and signs up successfully

Scenario Outline is a keyword where it replaces the variables defined in the test with the values provided from the feature file. It is used when we have multiple scenarios with the same preconditions, actions, and outcomes but different input values. Let’s see an example.

Scenario Outline: I will prepare different food every day

Given: I open the fridge When I pick up the "<ingredient>" Then I will prepare "<food>"

From the example above you can notice that we have a table defined with “ | ” and two variables: ingredients and food. They are used in the scenario above by providing two different row values (Meat, Sandwich) and (Vegetables and Salad) respectively.

When we have all the page object methods in place, the test will be executed twice, once for the first set of input values and for the second input values from the table row. With “<>” we can pass values in the scenario. Cucumber sees that the ingredients and food are variables that have multiple values. When the test flow arrives at those variables Cucumber replaces the variables with the provided table values which and proceeds with the test execution.

Data Tables are useful when we have different scenarios with different needs.

In the step definition file we can initialize the data table and get each raw:

With this, we are getting the specific values from the raws and use them for our purpose which can reduce the time of having repeatable tests and longer test execution.

#This is a comment for the scenario Given: I open the fridge When I pick up the "<ingredient>" Then I will prepare "<food>"

It’s a piece of code that is not meant for execution just for explanation and additional documentation purposes. Comments can be added anywhere in the feature file.

Reports can be generated with the following code:

After execution, a report in HTML format will be generated in the path provided. The result will consist of all the tests whether they pass or fail.

By now you probably have a general idea of what Cucumber offers as far as automation tests go. Now, I will show you a simple example of how one test using Cucumber BDD based on Typescript looks like.

So, putting all together:

Description: User navigates to the SignUp page, fills out the form with valid input data, clicks on sign up button and signs up successfully

import { binding, given, then, when} from 'cucumber-tsflow';
import pageObject from "../pageObject"

As you can see we have three files, feature file when we define the feature as well as a scenario for that feature, step-definition file where we map every sentence from the scenario with a different method, and page-object where the actual application interaction happens.